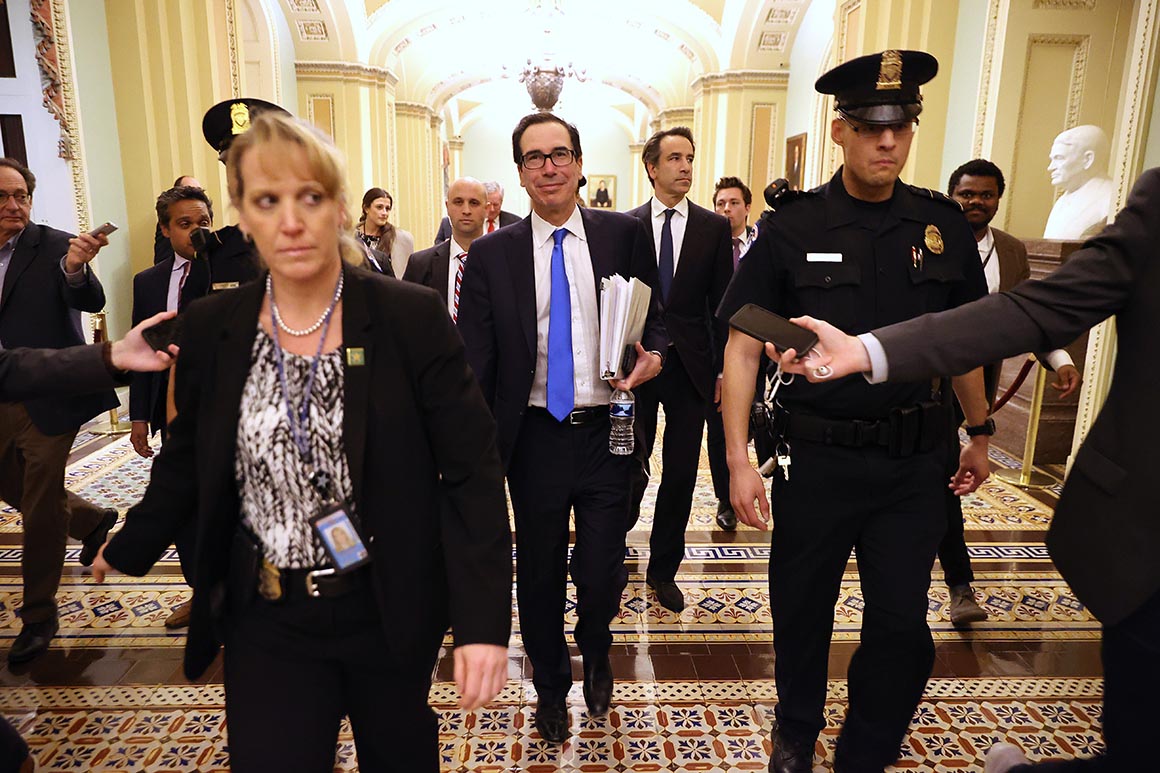 This gargantuan bill won’t make it to President Donald Trump’s desk without some last minute political angst: Sen. Bernie Sanders is threatening the bill because it doesn’t have enough restrictions on the business bailout and Republicans think the unemployment aid is too generous.

Here’s a look at who’s getting what, and why that matters:

Why it matters: A group of GOP senators threatened Wednesday to block a fast-tracked vote on the measure, arguing that some workers would actually get a raise over their actual pay. “We have incentivized people not to go back to work,” Sen. Lindsey Graham (R-S.C.) said. Unemployment claims are also climbing by the tens of thousands every day in states across the country, and congressional negotiators acknowledge that benefits may need yet another boost through additional relief packages.

What they got: The Treasury Department would divvy up a $500 billion pot of loans to struggling industries like airlines, and even cities and states.

Why it matters: Rules added to the bill will order an inspector general and accountability committee to oversee how the money is spent, rather than giving Treasury Secretary Steven Mnuchin broad power to cut the loan checks. Veterans of the 2008 bank bailout say, however, that the effectiveness of that oversight will only be as strong as the chosen watchdogs and how much power they really have.

CHECKS ON THE WAY

Why it matters: People who don’t pay taxes, such as those with very low incomes, may be hard to reach the way the program is designed.

HOSPITALS GET THEIR WISH: $100 BILLION

What they got: Health care providers would secure $100 billion in grants to help fight the coronavirus and make up for dollars they have lost by delaying elective surgeries and other procedures to focus on the outbreak. They would also get a 20 percent bump in Medicare payments for treating patients with the virus.

Why it matters: This figure is exactly what three powerful groups representing physicians, hospitals and nurses had demanded, though for-profit hospitals were lobbying for much more. But there are still questions about whether there will be significant guardrails on how the money will be split up. The coronavirus will hit rural hospitals especially hard, since they already operate on thin margins and have limited staffing capacity. So some lawmakers have been working to ensure enough money goes to those sites.

What they got: Airlines would receive $29 billion in grants, and $29 billion in loans and loan guarantees, as well as a reprieve from paying three of their major excise taxes on the price of a ticket, the fuel tax and a cargo tax. That funding comes with strings, though — no stock buybacks, and limits on executive compensation, to start. Half the funds would go toward “the continuation of payment of employee wages, salaries, and benefits” while the other half would go to loans and loan guarantees for passenger airlines, repair stations and ticket agents — subject to conditions.

Why it matters: This is the amount that the industry sought. The bill doesn’t include some conditions that Democrats wanted, like commitments to cutting emissions. The Association of Flight Attendants-CWA cheered the bill, saying the grants in particular would “save hundreds of thousands of jobs.”

What they got: Businesses would get a tax credit for keeping idled workers on their payrolls during the coronavirus pandemic, so long as the businesses meet certain criteria. They would get a refund for half of what they spend on wages, up to $5,000 per worker.

Why it matters: To qualify, businesses have to prove they took a 50 percent loss compared to the same quarter in years past. And to keep companies from double-dipping on aid under the bill, employers won’t be able to get special SBA loans if they opt for the tax credit.

What they got: The agreement would provide $150 billion for state and local governments, with $8 billion set aside for local governments, which are bleeding tax revenue as only essential businesses remain open and unemployment claims climb by the tens of thousands every day.

Why it matters: Congressional negotiators are already talking about a fourth legislative relief package that could include more money for state and local governments. Governors warned this week that their states are running out of funding to fulfill the skyrocketing number of unemployment claims, and could face multibillion-dollar budget shortfalls in the weeks and months to come. The funding the stimulus provides is only a “drop in the bucket” compared to the need, New York Gov. Andrew Cuomo said.

What they got: The Defense Department would field an infusion of $10.5 billion, including $1.5 billion for the National Guard to deploy up to 20,000 on-call soldiers to help state response teams fight the coronavirus over the next six months. The bill would also spend $415 million on research and development work at the Pentagon, aimed at developing vaccines and antiviral medicine.

Why it matters: The bipartisan rescue package gives the DoD well above the $8.3 billion the Trump administration requested and what House Democrats wanted.

What they got: Insurers wanted an emergency fund to offset big losses stemming from the pandemic, as well as premium subsidies to help fund temporary “COBRA” coverage for laid-off workers. They got none of that, although the legislation aims to protect them from price-gouging on coronavirus tests.

Why it matters: Officials in the health care industry don’t really know how much money plans will lose during the crisis. While insurers are probably saving money from mass cancelations of expensive elective procedures, they are still bracing for unprecedented numbers of hospitalizations. Insurers also already got a $16 billion gift when Congress repealed Obamacare’s health insurance fee in December.

What they got: They would get to defer the 6.2 percent tax they pay on wages that is used to fund Social Security.

NO CASH FOR THE OIL STASH

What they got: The bill does not include the $3 billion Trump sought to fulfill his promise this month of filling the country’s oil stockpile “right up to the top” as a way to aid U.S. drillers amid a price decline. Democrats also failed to clinch language extending tax breaks for renewable energy industries.

Why it matters: This fight isn’t over. Congress has made plenty of deals in the past that combine something for clean energy companies with something for the oil industry — most recently in 2015 when lawmakers agreed to end a ban on oil exports and extend several tax breaks for renewable energy.

What they got: The Trump administration would get $200 million for boosting Skype-style health checkups by investing in services and devices that help health care providers connect remotely with patients.

Why it matters: The FCC helps run a rural health care program devoted to subsidizing the connectivity for health care providers, which gives it some stake in telehealth. The total jives with what FCC Chairman Ajit Pai requested earlier this month. This represents just the FCC’s stake in telemedicine, not other parts of the government.

NO HELP FOR THE ‘HOMEWORK GAP’

What they got: The deal is likely to omit funding that both lawmakers and the Trump administration sought to close the “homework gap,” the term used for the difference between families with internet connections and equipment and those without. Democrats had wanted at least $2 billion to go directly to an FCC subsidy program that helps schools and libraries connect to the internet, while FCC Chairman Ajit Pai requested $50 million for a pilot program geared specifically toward helping schools.

Why it matters: Millions of students are now stuck at home during the pandemic without a way to continue their studies online. Advocates will continue pushing for assistance.

What they got: The deal does not appear to include any direct funding for the ailing cruise ship industry, which has been devastated by the pandemic.

Why it matters: Trump has called the cruise industry a “prime candidate” for federal assistance and a “great and important industry,” so look for further efforts from the administration to support the struggling sector.

What they got: Retailers, restaurateurs and hotels will be able to immediately deduct from their taxes what they spend on property improvements. They were supposed to get the write-off in the 2017 tax overhaul, but a glitch actually made them worse off.

Why it matters: While the fix will help by letting businesses file amended refunds from prior years, it isn’t enough on its own to dig out those industries, which are among the hardest hit by mandatory shutdowns and social distancing directives.

NO SAVIOR FOR THE POSTAL SERVICE

What they got: The already-underwater U.S. Postal Service won’t receive any assistance under the measure, despite House Democrats proposing $25 billion to keep the federal carrier going amid the pandemic, plus language to wipe out its $11 billion debt.

Why it matters: Democrats have warned that fallout from the virus could decimate the U.S. Postal Service by June, absent action from Congress. The independent agency will likely need some financial relief in future legislative packages to stay afloat.

What they got: The stimulus includes nearly $25 billion for food assistance, including nearly $16 billion for SNAP and nearly $9 billion for child nutrition.

Why it matters: Senate Democrats were unable to secure a 15 percent increase to households’ SNAP benefits. Congressional leaders acknowledge that they may need to provide additional rounds of food assistance in future legislative relief packages.

What they got: Nearly $24 billion, including $14 billion for an obscure Depression-era financial institution that USDA has wide discretion to use to stabilize the farm economy. Another $9.5 billion would be set aside for emergency aid for the agriculture sector, including cattle ranchers and fresh fruit and vegetable growers.

Why it matters: More aid might be on the way. Republican senators from major cattle producing states, like Sen. John Hoeven (R-N.D.), initially sought to replenish the Depression-era program with $20 billion, as well as increase USDA’s borrowing authority from the institution to $50 billion.

What they got: The final package provides more than $30 billion in emergency education funding for colleges and universities, states and school districts.

Why it matters: House Democrats initially called for double that amount and certain education groups have asked for significantly more help, urging the government to contribute far more toward special education costs, for example.

What they got: Distilleries received a temporary exemption from an excise tax for alcohol they use to make hand sanitizer that’s produced and distributed within Food and Drug Administration guidelines.

Why it matters: While Americans are drinking more at home with their local watering holes closed, the liquor supply may come up short.

‘Nobody wants to talk about it’: Senate remains idle as Afghan war lurches on

Jackie Speier erupts at reporter for The Hill